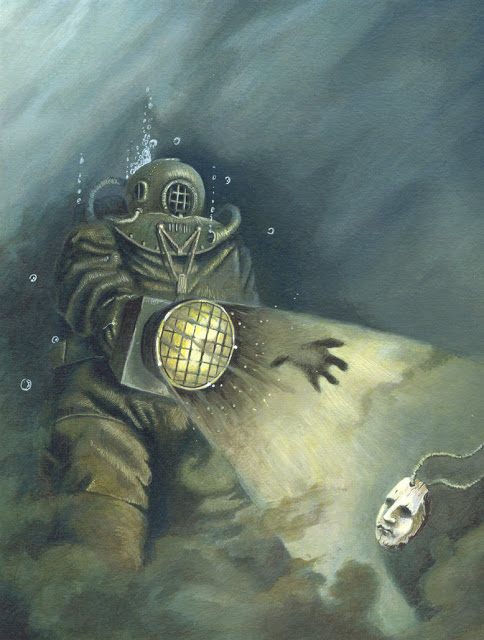 “The Temple” artwork by David Saavedra

Once the crew of Submarine U-29 are in possession of the piece of ivory carved into the image of a youth’s head with a laurel crown in H.P. Lovecraft’s “The Temple,” strange things start to happen. These strange events include increased nervousness, weakness, forgetfulness and laziness among the crew.

The crew also experienced bad dreams and some appeared to become physically ill. Several of the crew started to have hallucinations, observing bloating bodies out of the undersea portholes. According to the affected crew, many of these bodies were victims who died in the ships that the German submarine sunk in past battles.

Days later, several of the crew who were ill became violently insane; others were not violent but were constantly raving about the young man who was watching them. Men started to disappear and it was thought they committed suicide. Since no bodies were found, it was assumed that they jumped “overboard” but no details regarding this are provided. After these suicides, many of the crew continued to be ill but there were no further disturbances. However, after the explosion of the engine room, the insanity and associated violence among the crew increased resulting in the Lieutenant-Commander killing some of them. Remaining crew members killed themselves, eventually leaving the Lieutenant-Commander by himself. So, what was the cause of the mass hysteria and illness that eventually led to the death of the crew of Submarine U-29? 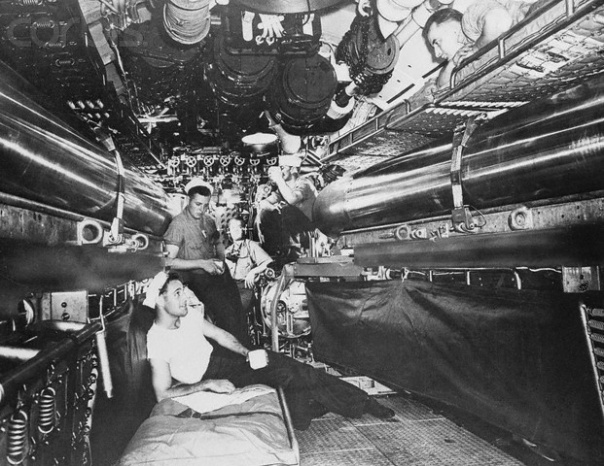 Tight conditions in a submarine

A crew of men and women in a confined space such as a submarine would be very susceptible to communicable diseases, particularly those air borne in nature. Indeed, respiratory illnesses can be particularly problematic for submarine crews. It is interesting to note that based on data collected by the US Navy, in general overall incidences of medical problems / injuries tend to be higher on surface vessels than submarines (from a US Navy study from 1989; http://www.dtic.mil/dtic/tr/fulltext/u2/a211258.pdf). However, some of the more common afflictions associated with long submarine runs include post-traumatic stress disorder (PTSD) and during situations of war such disorders can develop into life-threatening or disturbing conditions (www.beinghealthy.tv).

In the situation of the Submarine U-29 several or many of the crew may have been on the verge of suffering from PTSD even before they found the idol. We do not know how long the crew was on the sea when they found the little ivory idol of the youth crowned with laurels. However, finding this strange idol coupled with the seemingly supernatural event of the body of the dead sailor swimming away, may have triggered PTSD, eroding the “iron will” of the crew in spite of what the Lieutenant-Commander stated. Thus, the idol itself may not to be blame for the situations on the submarine but may well have triggered them. With each murder or suicide, the symptoms of PTSD among the crew would have only increased and spread. Thus, the first hypothesis to explain the incidences on U-29 is PTSD, which was triggered by finding the strange little idol by a crew already exhausted from being on the ocean during war for an extended period of time. However, an alternative hypothesis is that the idol itself may have had a pathogenic organism on it that could infect humans.

The abundance and diversity of viruses in the ocean is incredibly high – each milliliter of ocean water contains several million virus particles. Many ocean viruses cause diseases in marine mammals. Phocid distemper virus is a morbillivirus of Arctic phocid seals that has killed thousands of harbor seals in Europe. Similar viruses kill dolphins and other cetaceans. Many other viruses infect marine mammals and even cause disease in humans, including adenoviruses, herpesviruses, parvoviruses, and caliciviruses (http://www.virology.ws/2009/03/20/the-abundant-and-diverse-viruses-of-the-seas/). For example, in 2013 over 1,000 migrating bottlenose dolphins died from a measles-like virus along the East Coast of the U.S. (https://www.scientificamerican.com/article/virus-kills-over-1000-bottlenose-dolphins/). Indeed, the strange behavior of the dolphins, following the submarine deep into the ocean through the course of the tale, may have been symptoms of the virus affecting the dolphins’ brain.  Thus, it is possible that some type of unknown virus was brought on-board U-29 with the biological agent either being on the small ivory idol or on the dead sailor that was clinging to the submarine? 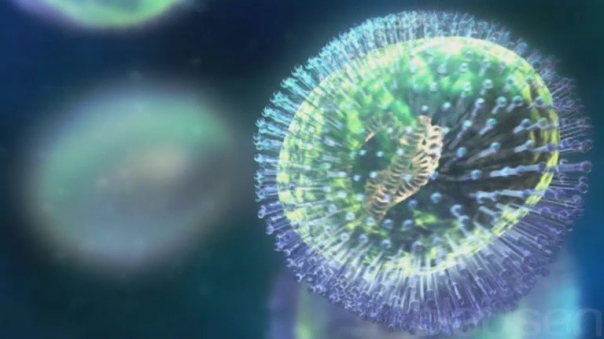 The structure of the morbillivirus, a measles-like virus responsible for the death of dolphins

In conclusion, while finding the strange little idol seems to have produced supernatural occurrences in “The Temple,” it is absolutely possible that the situation was the result of PTSD and/or an unknown biological agent that could exist in the deep ocean. Also, I you want to get a feel for what it would be like on a submarine during war, I strongly suggest the excellent movie “Das Boot.” Next time we will conclude our discussion of H. P. Lovecraft’s “The Temple” by reviewing what the Lieutenant-Commander encountered when he actually entered the Temple. Thank you – Fred. 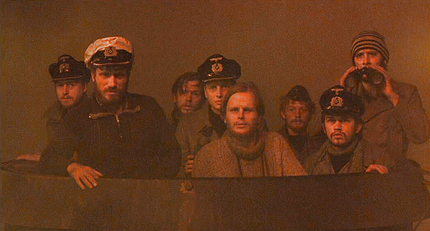 Previously we hypothesized that the Elder Things utilized both the strange ultra-stellar stone tablets and some of Ubbo-Sathla to create life on Earth. The stone tablets may have provided the recipe, while Ubbo-Sathla may have been the raw material. It is said that Ubbo-Sathla was deposited onto the Earth by unknown gods, which may have been from a previous or parallel universe. As part of the discussions regarding Ubbo-Sathla, a number of people have asked about the relationship between this entity and Abhoth – another discovery of Clark Ashton Smith’s.

First off, Ubbo-Sathla is clearly documented to have existed on primordial Earth, although it is questionable whether any part of it exists today. In contrast, we don’t have conclusive evidence that Abhoth was ever on Earth or even in our Universe. Abhoth is first mentioned in Smith’s “The Seven Geases” which documents events that occurred in Hyperborea, an ancient, northern civilization that is said to have existed between one and two million years ago (The Encyclopedia Cthulhiana by Daniel Harms, 1998). However, there is some debate if Hyperborea was actually an ancient civilization that existed on Earth or if it existed / exists in a parallel Universe such as that similar to the Dreamlands. However, those are topics for future discussions. Some clarification on this matter would contribute toward providing additional evidence one way or another as to if Abhoth is related to Ubbo-Sathla.

Abhoth itself is said to exist deep underground in a “slimy gulf in which Abhoth, father and mother of all cosmic uncleanness, eternally carries on Its repugnant fission.”  Abhoth is some type of pool of fluctuating, grey, organic, mud-like material that constantly produces creatures and living things that crawl and slither away from it. The further away the grey creatures move away from Abhoth itself, the larger they become, although frequently they are consumed by each other and/or fall back into Abhoth.

Abhoth itself appears to be a seething mass of organic material constantly forming organs and appendages such as arms, legs, fins, claws, mandibles and mouths. It is continuously feeding on the things that break apart from it through fission and creep away from the main mass. The few that do seem to escape appear to increase in size the further away they are from Abhoth. At first Abhoth may seem to be very similar to Ubbo-Sathla or even a shoggoth but there are some significant differences. 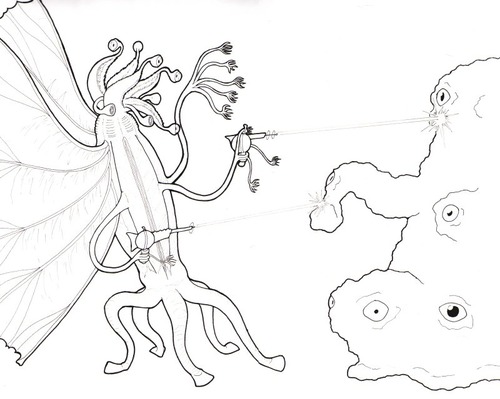 An Elder Thing valiantly faces a Shoggoth by SPark (www.spark.artician.com)

Second, Ubbo-Sathla was one seething mass of living, bio-matter, with no recorded ability to reproduce. Shoggoths are distinct, individual entities that usually do not reproduce unless they are “allowed” to by the Elder Things. The exact mechanism the Elder Thing used in this assisted reproduction of the shoggoths is largely unknown, although it tends to be associated with something called the shoggoth pits. Essentially, this means that even binary fission is even quite rare in shoggoths. Those that acquired the ability to asexually reproduce through binary fission were quickly eradiated by the Elder Things. In sharp contrast to both Ubbo-Sathla and shoggoths, Abhoth is constantly undergoing fission, generating sub-organisms that are typically reabsorbed but a few do manage to escape.

Third, based comments made by Abhoth itself, it has biologically similarities to life on Earth but admitted that such life (humans) were quite alien to its experience and thus did not want to consume the protagonist in the story for fear of endangering its digestion. Again, this suggests that Abhoth is an alien to Earth and possibly our Universe. In contrast, both Ubbo-Sathla and shoggoths are known to be residents of Earth.

So Abhoth is distinctly “alien” compared to Ubbo-Sathla and shoggoths but possibly not as “extra-dimensionally alien” as say the Mi-Go or the spawn of Cthulhu. What could Abhoth be? Since Ubbo-Sathla may have given rise to all prokaryotes (bacteria), eukaryotes (animals, plants, fungi and protists) and super-eukaryotes (shoggoths), Abhoth may have given rise to a very common form of life on Earth and yet is very “alien” compared to the rest of life. In fact, some question whether they can be truly thought of as life – this group of strange organism is the viruses.

Viral phages injecting their genetic material into a cell for reproduction. Are viruses all that is left of Abhoth? (www.jonlieffmd.com)

Viruses are the smallest organisms on the planet, many being 1/100th the size of most bacteria. The number and diversity of viruses on the Earth have been severely underestimated (Microbes and Evolution: The World That Darwin Never Saw, edited by Roberto Kolter and Stanley Maloy, 2012). Additionally, the global pool of viral genetic information, called the virome, may be an important driving force in microbial evolution primarily through horizontal gene transfer. As we have discussed in the past, it is hypothesized that horizontal gene transfer may have been played an important part in the acquirement of increased intelligence by shoggoths over the millennia. Is it possible that Abhoth over time, piece by piece, slowly shrank in size as parts of it broke apart and spread throughout the world? In turn, over the centuries Abhoth may have eventually dissipated until it was the virome, strands of RNA and DNA encased in a protein shell, wholly dependent on the life of Earth to replicate and survive – viruses.

An alternative hypothesis is that Abhoth may be an asexual, evolutionary decedent of Ubbo-Sathla or possibly being a piece or fragment of Ubbo-Sathla that was no useful by the Elder Things in creation of new life.  Related to this, yet another hypothesis is that Abhoth was another failed bioengineering experiment of the Elder Things, cast away into Earth’s biosphere since it was not considered a threat to them. In any event, until we know more about the origins of Abhoth itself or possibly conduct a tissue examination / comparison between Abhoth and shoggoths (and if possible Ubbo-Sathla?) we may never know the true relationship, if any, among these entities. 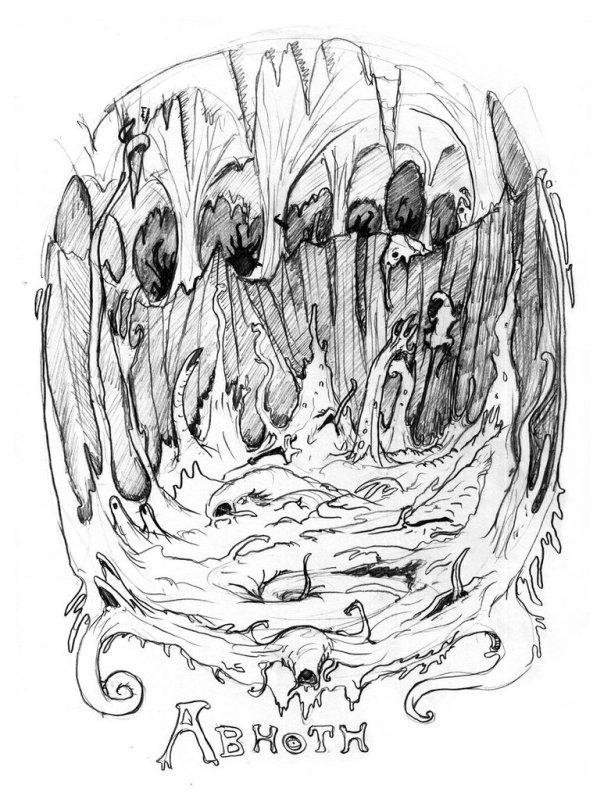 Next time we will finally turn back to a discussion of H.P. Lovecraft’s “The Lurking Fear.” Also, I want to say thank you to everyone who has contributed toward the Kickstarter for the second volume of the Journal of Lovecraftian Science.  We reached our goal a few days ago – thank you very much! Fred.