“They were the great “Old Ones” that had filtered down from the stars when earth was young – the beings whose substance an alien evolution had shaped, and whose powers where such as this planet had never bred.” – from H.P. Lovecraft’s At the Mountains of Madness. 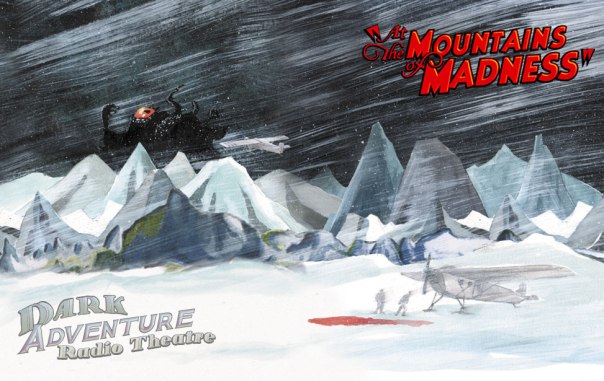 At the Mountains of Madness by the HP Lovecraft Historical Society

Ether was once thought to be some type of material found throughout space, which allowed light to pass through.  Christiaan Huygens hypothesized that as sound waves travel through air and mechanical energy can travel as waves through water, light waves needed to travel through some type of media.  Huygens described this semi-physical material as aether and it allowed light to travel even through the vacuum of space.  However, the Michelson – Morley experiment of 1887 provided evidence that light was not traveling through a luminous aether.  By the 1920s a sufficient amount of experimental evidence accumulated to indicate light did not need the aether to travel through space.

So, what are we to make of Lovecraft’s proposed hypothesis that the Elder Things propel themselves through space with ether?  In Lovecraft’s day the hypothesis of the ether was already largely regarded as not a valid interpretation of how light travels through space.  However, in spite of the scientific evidence for the absence of the aether, this material took on an almost metaphysical status.  For example, in Modern Science and Materialism, a book written by Hugh Samuel Roger Elliot and known to have a large impression on Lovecraft’s philosophical and cosmic view, it is stated…” The aether of space makes no impression on our senses, and its more rapid vibrations cannot be perceived. Yet we can easily understand that they exist, and in our “mind’s eye” see the ultra-violet rays which our bodily eye is blind to.” Thus, based on this metaphysical viewpoint, just because we cannot perceive or measure it, at least not yet, does not mean it does not exist.  A reality existing beyond our Earth-bound senses was a theme in many of Lovecraft’s tales including At the Mountains of Madness.

An alternative hypothesis to the utilization of aether as a means of interstellar transportation, has been that the Elder Things use dark matter and/or dark energy as a means of propulsion. However, it should be emphasized, that dark matter or dark energy is not simply a replacement for aether.  As explained by Sean Carroll, aether was a theoretical idea that could not be verified with experimental evidence.  In sharp contrast, dark matter and dark energy are observations in the universe that physicists would love to ignore but can’t (http://blogs.discovermagazine.com/cosmicvariance/2012/06/08/dark-matter-vs-aether/).  Dark matter is a new, but currently undetectable, kind of matter that appears to be required to explain how galaxies spin with our understanding of gravity.  Dark energy is a strange force that causes the universe to expand at an accelerated rate (Calculating the Cosmos by Ian Stewart, 2016).

The reluctant consideration of dark matter originates with trying to explain why galaxies in the Coma cluster move substantially faster than they should under Newtonian gravity.  Specially, based on the observed rates of movement the galaxies should fly apart and the cluster should dissolve, again based on Newtonian physics.  Since they don’t something else must be holding the cluster together. Currently, the leading hypothesis for this observation is the presence of dark matter.  Dark energy is thought of as an anti-gravity field which is driving the galaxies apart (Parallel Worlds by Michio Kaku, 2005).  In addition, dark matter and dark energy combined account for 96% of the mass-energy density of the universe; our “normal” (baryonic) matter only accounts for about 4% of the total mass-density in the universe.  Thus, while as humans we have difficult time measuring or imagining what dark matter and dark energy are, the Elder Things with senses beyond our five, may be able to recognize, quantify and thus utilize these “dark” forms of mass-energy.

Maybe the Elder Things utilize dark matter as a sort of “fuel,” powering their interstellar sails (wings) and dark energy is a form of biological, anti-gravity drive that propels them through the cosmos.  However, even with such exotic forms of matter and energy, it is doubtful that the Elder Things could travel faster than the speed of light.  While certain factions of the Elder Things are known to utilize inter-dimensional travel as cited in “The Dreams in the Witch-House” (more on that in a later article), it appears that the majority of them travel through interstellar space.  Since the Elder Things seem to be essentially immortal, largely through their asexuality, and have an extremely tough yet flexible outer skin, it is more than likely that the majority of their time is spent passively drifting in space in an inactive, cryptobiotic state.  Next time we will talk about the Elder Things cryptobiotic state in space.  Thank you – Fred. 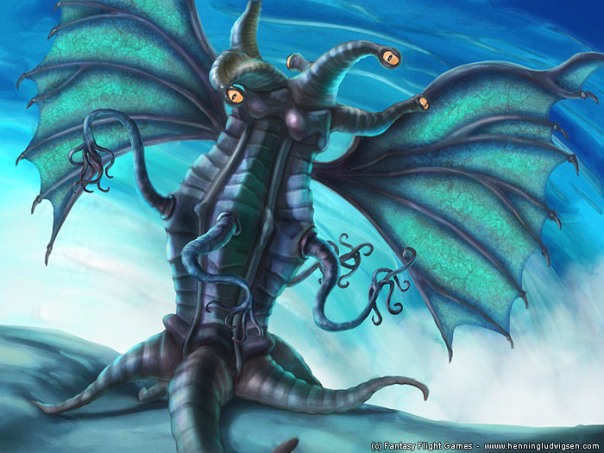