In “The Lurking Fear” H.P. Lovecraft documents the gradual isolation and eventual disappearance of the Martense family, whose ancestral mansion was located on Tempest Mountain. With the disappearance of the family came tales of demons or ghouls that attacked lone travelers after dark. Based on the available evidence these attacks were predaceous in nature; that is, the goal of such attacks was not robbery, establishing a territory or evil mischievous actions but instead was a means of obtaining a source of food. Additionally, these attacks appeared to increase in frequency during thunder storms.

While these attacks of the Tempest Mountain “demons” continued to be strongly correlated to thunder storms, the magnitude of these incidences increased with the culmination of an attack on a squatter’s village resulting in 75 people either dead or missing after a particularly severe storm. All of the identified corpses were mangled, chewed and clawed as if they were feed on by a group of large animals.

A logistical growth curve for a population, demonstrating the limit in growth as its carrying capacity (K)

In any environment there are only so many resources available for exponential growth for a population until they begin to slow down due to the scarcity of that resource (and/or other resources). For example, when there are more than enough nutrients to stimulate high rates of algal growth an algal bloom will be result, particularly during the summer when water temperatures are high. However, once all of the available nutrients are assimilated by the algae, the bloom will “crash” due to nutrient limitation and possibly other limitations, such as light, which is a result of the bloom itself reducing water clarity. The point at which the population attains its maximum density is its carrying capacity. However, as shown below a population does not simply remain at its carrying capacity. It can oscillate or varying in a number of ways depending the availability of the limiting resource as well as a number of other factors (seasonal variations associated with changes in temperature and light, availability of other resources, disease, competition with other organisms, predation, etc.). In addition, as well be proposed in the case of the Tempest Mountain Demon, the actual carrying capacity of these creatures may have been exceeded, which resulted in the documented incidents reported in “The Lurking Fear.” Essentially, the population of “demons” exceeded their carrying capacity and they were attempting to adjust to these conditions.

Variations in how a population responses to its carrying capacity over time (www.study.com)

It should be noted that the carrying capacity (from now on we will use the term K) is not a fixed number. It can increase or decrease depending on environmental conditions and changes within a population as a whole. For example, the K for a given community or species maybe much lower during drought conditions relative to normal amounts of precipitation. In contrast, a community or species itself can increase its own K through mutation or adaptation to changing environmental conditions, expansion of their range of habitat, or through specific behavioral changes. For example, humans have been able to expand their global K through advances in technology (see below). One component I would add to this as well as industrialization is the development of medicines, specifically antibiotics and vaccines, to combat diseases, which historically has been known to have devastating impacts on global populations (e.g. the Plague of the Middle Ages; the Spanish Flu of 1918). Whether human technology will continue to raise our global K or if we will overshoot this value and subsequently result in a dramatic decrease or decline in the global population due to a disease or political instability has yet to be seen. However, the K of any species cannot continue to be raised forever. 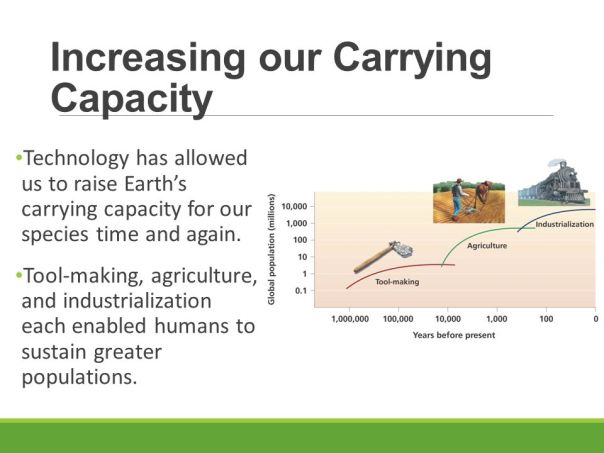 How advances in technology have resulted in humans raising their global carrying capacity (www.slideplayer.com)

In the case of the Tempest Mountain demons, their subterranean population more than likely exceeded the available food resources found in the immediate area. The birds, beasts and fish that provided sustenance for the demons on the Mountain were eventually depleted. This, in conjunction with an increase in the size of the population under the mountain, resulted in the demons expanding their hunting ranges and changing their behavior; that is, they became far more aggressive in their predaceous habitats. Thus, the horrible situations and local moralities documented in “The Lurking Fear” were more than likely the result of population fluctuations and a limitation of local resources.  Next time, we will discuss in more detail the biology of the Tempest Mountain Demons.

The Lurking Fear from http://www.featurecreatureart.blogspot.com

1 thought on “Population Fluctuations in the Tempest Mountain Demons”