Given the relatively small size of Pluto, it may seem unlikely that the dwarf planet has an atmosphere. However, the instruments on New Horizons have indeed detected a nitrogen-rich atmosphere as far as 1,000 miles above Pluto’s surface. It turns out that the dwarf planet’s atmosphere is being stripped away by the sun’s solar winds. A “tail” of cold, dense, ionized gas has been detected trailing 48,000 to 68,000 miles beyond Pluto. 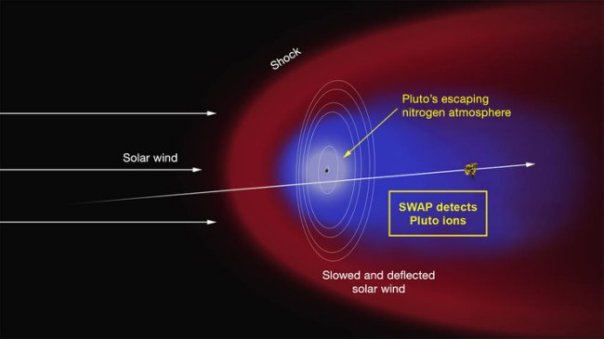 The solar winds are a constant stream of electrically charged particles emitted by the sun in all directions. The average distance of Pluto from the sun is about 3.67 billion miles (approximately 39.5 astronomical units also known as AUs; Earth is approximately 1 AU from the sun). The solar winds hit Pluto and push its atmosphere into space, mostly composed of nitrogen ions. Ionized gas is created when energy (solar winds) slams into gas particles, stripping electrons off of atoms. In turn, this creates plasma, the fourth state of matter which is rare on Earth but is the most abundant form of matter in the Universe.

It has been hypothesized that Cthulhu itself is composed of an extra-dimensional form of plasma, a sort of alien ionized matter crammed into our 4-dimensional space-time. Such a hypothesize would explain the fluidity and strange shape / size changing abilities of Cthulhu as well as its “weakness” relative to existing in our space-time (e.g. imprisoned and asleep in R’lyeh in the bottom of the Pacific Ocean). Maybe additional investigations into Pluto’s atmosphere will contribute toward a better understanding of Cthulhu and many of the other Old Ones!

Cthulhu is more than like composed of a form of alien plasma; artwork by Uncannyknack (www.deviantart.com)

2 thoughts on “Notes from Yuggoth part 5 (a depleting atmosphere)”